I only seem to think coherently when I’m ill, so it is both fortuitous and fortunate that Tom Bennett’s blog post about Sweden should come out just as I’m stuck in bed and bored.

His analogy strikes a chord. I won’t argue with it; I will try to add to the polyphony by examining my Autumn half term trip to Copenhagen.

Nyhavn, the name of which I loudly and confidently mispronounced for most of our visit.

When we decided to go to Copenhagen, my knowledge of Denmark was limited to:

On the one hand, that’s not much to use as the basis for exploring a major European city; on the other, it shows the difficulty of using one’s own, adult experience as an analogy for children’s learning. Like Tom, I may be ignorant but I am far from naïf.  When do we cease to be tabulae rasae?

I am fairly sure that I knew next to nothing about Copenhagen itself, except that there’s a big government building, a bridge, a lot of water and a statue of a little mermaid.  In that sense, I think I was a pretty EYFS urban explorer.

Step One: talk to someone who knows

Lunch with my friend Liz and her niece Nikki helped enormously. Nikki works in Malmo and weekends in Copenhagen, so she had a fairly good idea about the city. Her starting point with us was, “What do you want to know? What do you want to do?”  These questions challenged me to think about my own learning intentions (as an obsessive learner, no trip is simply a holiday). I told her that I wanted to understand Danish culture and history, and to relax, eat real Danish pastries and drink decent coffee. Only then did Nikki pull out her iPad and start showing us the map of the city. I will try to recall how she did this. On the one hand, she showed the locations of various areas – ‘proper’ shopping, interesting food, museums and buildings of note; on the other hand, she related these to her own preferences and experiences. She gave us a short list of places we should visit. We wrote none of this down but came away from lunch with a better sense of what we wanted and where we might find it, now based on a mental map of the city.

Deliciously Danish: we knew what we wanted.

What might I deduce from this? That it is helpful, as an adult at least, to have a teacher whose instruction is guided by what I want to learn – or what I want to do with that learning.  But also that it is uncomfortable being asked those questions because it forces me to think and to acknowledge gaps in my supposedly coherent rationale for life. Ultimately, once I overcame that discomfort, it was a relief to acknowledge my lack of knowledge and direction and to say, “Apart from that, I haven’t got a clue. Just tell us what you’d do.”  So directed learning was useful and made more purposeful by my teacher’s initial questions about my own learning intentions.

I then bought the Lonely Planet guide to Copenhagen and pored over it while my wife slept. I’d say that this is typical: when the going gets interesting, I disappear into a book. Every now and then I’d nudge my wife and bring her reluctant attention to this area or that, to Plan A or Plan B. She loathes maps and likes details, so my interruptions to her sleep had to be brief and purposeful. I like to think through possibilities, build overlapping and inter-related mental maps with alternative worlds. In this case, one in which we wore ourselves out with every cultural experience possible, and a few others in which I accepted the inevitable and we had a mixture of culture, coffee and cake. The book was bewildering: too many possibilities, too much information to absorb without tangible experience of the city, so I had to accept that this would only ever be a sketch-map. But by the time we boarded the plane, I had a better sense of where we might go, what we might do and why (this last one being the compromise between my own desires and my wife’s wishes). 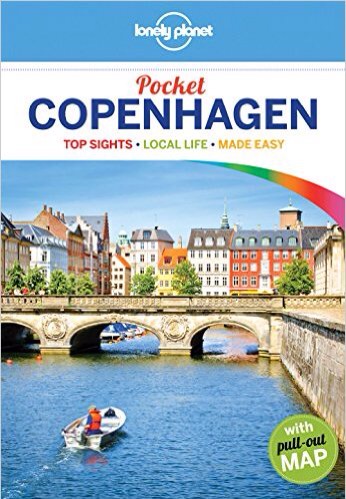 Once again, what can I infer from this?  That I, as a learner, need time to reflect quietly, to absorb more information, to make sense of it for myself, to make further sense of my thoughts by articulating them and asking for another’s opinion.  And that I prefer possibilities, broad outlines and directions of travel to tightly tied-down facts and plans. Unlike my wife. The conclusion here seems obvious: we desire, think and learn differently. Why should this be different in the classroom?

I am comical in strange cities. While trying to apply my thoroughly thought-through mental maps and strategies, I ignore details such as the fact that we’re on the wrong side of Copenhagen railway station, that we have crossed the same road twice and that I’m dangerous when entrusted with a map. In short, it took me a little while to relate my vivid virtual world to the rainy reality of Copenhagen. We headed for one area, one street and one place: the nicest looking cafe, without any coherent sense of what we were doing. That first afternoon, before we booked into our hotel, we just wandered through the rain and made more sense of things. Photographs, maps and descriptions, written or spoken, only made sense when seen in context. Context such as how tired we were when walking around; how much less crowded and easy the streets were to negotiate than our go-to model of London; what other interesting and unexpected things we saw and wanted to know better; how disappointing some of our desired places now seemed; how connected and blurred the carefully demarcated areas of my mental map now became.

Kafe Kys, Læderstræde 7, worth a visit

So what? I think it showed me how fraught with misconceptions a purely mental and written construct can be. It showed me that that in exploring what was actually there, I not only adjusted and calibrated my conceptions but also found other things I wanted to learn about.

This took longest and seemed to contain least thought and action. Back in our hotel room, tired and wet, we talked about the afternoon, looked once more at the map and guide book, leafed through the brochures we’d picked up and reconsidered our plans for the following two days. It was clear to us that all we had taken in so far still left us lacking a meaningful and coherent view of the city. But we had a better idea of what we did and didn’t like. And we were clear about the best place to eat that night and our first steps for the next morning.

That discussion, honest and pragmatic, was important. Misdirected or intrinsically purposeless learning can be boring, frustrating and tiring. Just because it’s in the lesson plan, it doesn’t mean it’s the best way to learn.

I’m quite smug about this bit because we’d always planned to go to the National Museum of Denmark. After all, with only the sketchiest idea of Denmark’s history and society, we were blundering around its capital with little sense of what was relevant and why. We walked around the museum with a group and an English-speaking tour guide, a student of archaeology. Now, not only am I smug; I’m also the irritating one who monopolises the guide. As we walked around, I was able to make even more sense of what we were seeing and being told by comparing what I had learnt elsewhere and by probing more deeply. Whether she was being diplomatic or genuinely appreciated my curiosity, she was very forthcoming. We left with a far more coherent and detailed view of Denmark and Copenhagen. 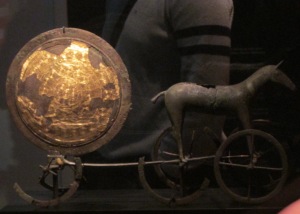 Bronze Age sun deity: the farmer who found it thought that it was a nineteenth century toy.

I can only speak for myself: I need a ‘big picture’ view at some point in any substantial learning. I crave information and instruction. I learn best dialogically. And I acquire knowledge and understanding associatively. Does everyone?

Armed with information, equipped with experience and clearer about what we wanted and could tolerate, we were able to be ruthless in selecting what we saw, confident that it would satisfy us both. We sped around the city for the next two days. The places we visited, the artefacts we saw, the behaviour we observed, even the food we ate had greater meaning and relevance. 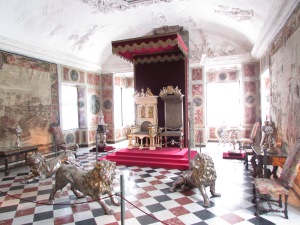 To be honest, of course, it is still a superficial and subjective understanding. But it made every experience taste delicious and it left me hungry for more. Shouldn’t all learning be like that?

So, as Tom says, sometimes we just need to be told stuff. Sometimes wandering around aimlessly is tiring and confusing. Purposeful stuff, in context, is valuable and tasty. And we need to make sense of what we have learnt, to associate and compare it with other things we know. We may also, at times, just want to be left to explore. But it is vastly more meaningful when we’re armed with the stuff. You know, knowledge. 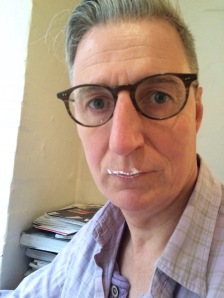 The author, in all seriousness.

As carefully as I have tried to recall my thoughts, actions and experiences, I cannot escape from my own subjectivity. I have constructed this out of memory and desire: what I think happened and what I wanted it to mean. Any anecdote or analogy is little more than a story, from which you can construct your own meaning.